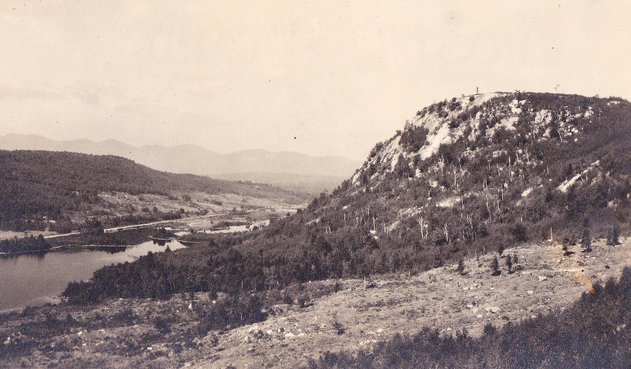 Mt. Jasper
The White Mountians, originally called the “White Hills”, were created when the North American Plate moved westward over the New England Hotspot. This took place around 124 to 100 million years ago. Widespread evidence of past glacial activity can be seen in the U-shaped form of various notches and round mountaintops. The ice sheet that covered Berlin, and the rest of the White Mountains, is called the Laurentide ice sheet. At some points, this glacier was 2 miles in hight and covered most of Canada and the northern part of the United States.
On June 4, 1642, Darby Field, an Irishman who was accompanied by two Indians, became the first white man to step foot in the “White Hills.” The journey lasted 18 days and he made the first assent of Mt. Washington. The Abenaki Indians believe the “great sprit” lives there, and no Indians stepped foot on there. They called this mountain “Agiochook” which means either “mountain of the snow forehead” or “home of the Great Sprit.”
The Abenaki tribes that visited Berlin were a part of the Eastern Abenaki branch. The most commonly known story about these Indians that visited Berlin is that of Mt. Jasper. Several hundred years after ice-sheets retreated from northern New England, approximately 11,000 years ago, small bands of hunters camped periodically in places along the headwaters of the Androscoggin River. As sources of chert are rare in northern New England and not easily accessible, hunters constantly searched for other stones in good supply that could be substituted for chert. Mt. Jasper and its outcrops of excellent raw material for making flaked tools passed unnoticed until 7000 years ago or 4000 years after exploration of the North Country.
The stone sought anciently at Mt. Jasper was rhyolite, a variety of igneous rock. Once found, its location was not forgotten until firearms and iron tools obtained in trade replaced stone weapons. In its heyday Mt. Jasper was visited regularly by Indians, at least every few years and
perhaps every season. The earliest quarrying at Mt. Jasper is marked by a series of shallow pits running along the strike of the rhyolite dike at the crest of the hill. There is no evidence that the Indians remained for long periods at Mt. Jasper because their work lasted only a few days.
The Abenaki used rivers as highways, as did many other Indians in that  time.
Back then they had no major roads. There is an old story of a white man  that was trading with the local Indians. The trader and an Indian were near the Berlin Falls when the trader realized he was out of bullets. The Indian, being a native of this area, knew where to find some lead. After 3-4 hours the Indian brought back a huge chunk of lead and possibly silver. It is believed that the Indian got the lead from the mountains between Berlin and Success, where in later years it was discovered by a hunter that there is a vein of silver but unfortunately the whereabouts of this vein is lost to history and still sits waiting to be rediscovered.
We know that there is a vein of silver somewhere in these mountains because this hunter sent the samples to New York to have them tested and the results where that it was somewhere between 70-90% silver. Unfortunately this man searched for this silver vein for the rest of his life but could not find it again. The Androscoggin River back in the day, was a massive Indian highway where the Indians would get on in Maine and go up the river until reaching the Dead River in Berlin than they would most likely stop at Mt. Jasper, behind the Berlin High School, and stay for a couple days
and continue their journey. This time they would go up the Dead River to Head Pond and continue to the Connecticut River and from there can go down to Connecticut or anywhere else for that matter. The Indians called the Androscoggin River Arosaguntacook.
Eastern Abenaki is a dead laguage, but in Western Abenaki the word for shelter is Alomsagw, so from there we get the reconstructed Eastern Abenaki word "Adrosagunw" which would make Arosaguntacook mean something like "place of rock shelters". The Abenaki word for the Dead River was Plumpetoosuc, which might mean "shallow, narrow river with swift current." An Abenaki elder from Ondanak, in Canada, contacted me a while back and told me that he remembered his grandfather tell him the Abenakis called a water fall in Berlin "Nahsahwahnpanjahlook" which he said meant "the breathing casscades." Could this be Berlin Falls? 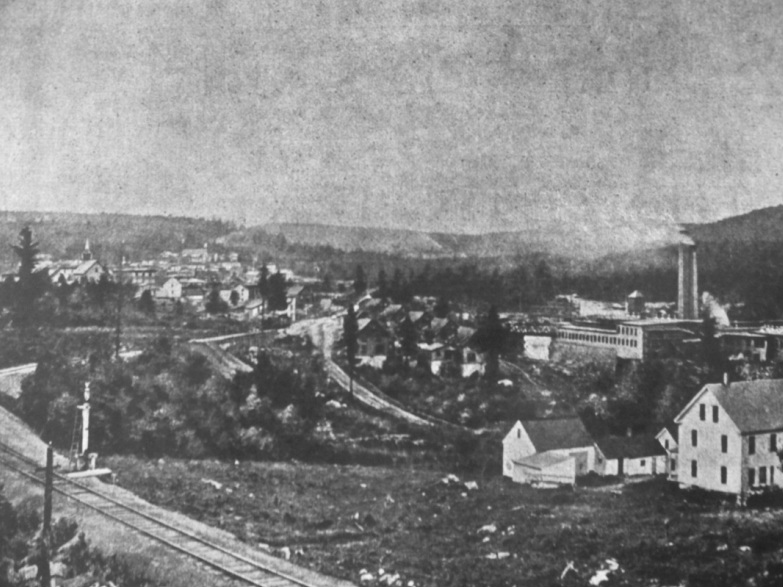 In 1771, land was surveyed under the orders of Governor John Wentworth. The township of Maynesboro, also spelled Maynesborough, started at a spruce tree at the southeast corner, a beech tree at the northeast corner, a rock maple tree in the northwest corner, and to a red birch tree in the southwest corner. All trees were marked with the letters M.B.P.B., which possibly stands for “Maynesboro Plantation Boarder”, but I’m not too sure.
The names of the grantees were, Sir William Mayne, Robert Mayne, George Gray, John Graham, Walter Kennedy, William Botts, Paul Wentworth, John Nelson, John Ward, Robert Graham, David Scrymgeour, Colin Mackenzie, Thomas Mayne, Edward Mayne, William Scrwens, Robert Needham, Samuel Smith, Thomas Evans, and William Wentworth. The grantees agreed that they would cut, clear, and make passable for carriages of all kinds, a road of 5 rods (82.5 feet) wide, at their own cost. 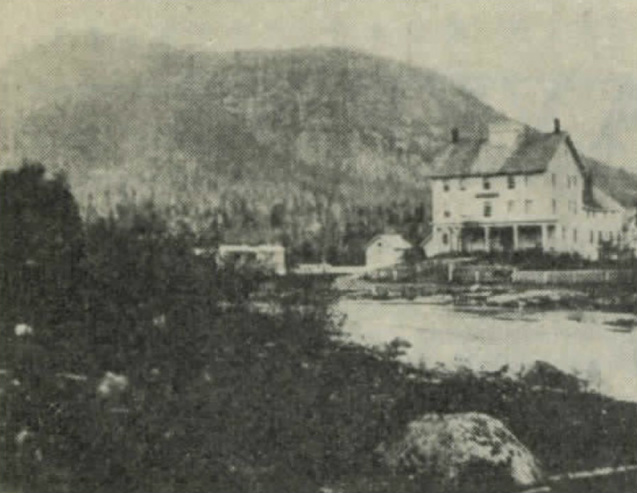 The Mt. Forist House
The Berlin Falls House or  "Green's Tavern,"which stood on the site now occupied by the Rosenfield Block on Green Square, was built in 1830 or 1831 by Amos Green, a lumberman from Shelburne, for his private residence. This building was the first frame building in Berlin, before this there were only simple log homes. From the left of the tavern extended a storage shed, and some open wagon sheds, ending with a large barn on the corner of Exchange Street. It was a typical country tavern outfit. There is no record of public use of this building until 1850, when one James H. Holt, acquired the property and opened the "Berlin Falls House" to the public. A few years later, John Chandler, a blacksmith, and an uncle to the John Chandler of Dummer, who became a famous tavern keeper in that town, bought Mr. Holt out and continue the business for several years.
The Tavern got into the hands of Merrill C. Forist, who ran it for several years until it was obtained by Daniel Green, after the foreclosure of a mortgage. In 1874, Sullivan Green with his family returned here from Detroit, Michigan, to "keep house" for his father, Daniel. The tavern was closed as a public house. With business acumen for which she was noted, Mrs.Green, "Aunt Kittie," conducted a popular high-class boarding house until her old age caught up with her. Many families lived here until they could earn enough money to build or buy their own homes.
Now let’s turn our attention back to Merrill C. Forist. In 1866, Mr. Forist purchased a small cottage and made large additions for hotel purposes and opened the Mt. Forist House. It was located on rising groun a little back of the site now occupied by the new Bickford Place park. He continued this hotel until his death in 1879. The accompanying picture was taken from a spot on, what was then called, "the island," directly across the canal in back of Maureen’s boutique. In the photo, one can see the Androscoggin River running in front of the Mt. Forist House, the river once ran where those large green pipes are now (in back of Tony's Pizza), making the little parking lot where the bonfires after the Homecoming pride is held and island. This is no longer the case.
The Mt. Forist House continued to function as a tavern with an additional bid for summer boarders—a popular enterprise in the North Country of yesteryear. When Mr. Forist died,  S. F. Leighton and Henry F. Marston then successively conducted the Mt. Forist House for a short time, and then Elizabeth Forist, the wife of Merrill, took charge of the business until February of 1885.The old New England taverns were mostly located on main traveled stagecoach routes. The coming of the railroad took the travel; and the tavern enterprise suffered. It was about this period of Berlin's history where "taverns" became "hotels."
Back to the top of this page