The History of Berlinite Women

A while back I was asked to write more about Berlinite women. I did a little research and now have accumulated enough information to start a special page dedicated to this topic. The first woman to live in Berlin came here around 1824 with her husband, William Sessions. Her name was Susanna (Blodgett) Sessions, born on January 17, 1796 in Gilead, Maine; she was daughter of Jonathan and Parna (Goodenough) Blodgett. Both of her parents lived till a very old age in Gilead. Mrs. Sessions did some moving around, starting and living in no less then ten homesteads throughout New Hampshire and Maine. She died in 1885 in Milton Planation, Maine (near Rumford).
During her stay here in Berlin, Mrs. Sessions convinced her brother, Samuel Blodgett, to come and build a home, which was the first home on
the west side of the river. She also convinced some other relatives and possibly some of her friends to come and settle in Berlin (Maynesboro) also. The first school teacher was Rhoda Rowell. Mrs. Rowell would travel to private homes; this way of teaching was done until 1831. In 1830, Berlin was divided into two districts for school purposes; the sum of $40 being raised for the support of the schools for that year. A school was built in district No. 1, at the base of Cates Hill road. Mrs. Rowell made about $1.00 to $2.00 a week with board. 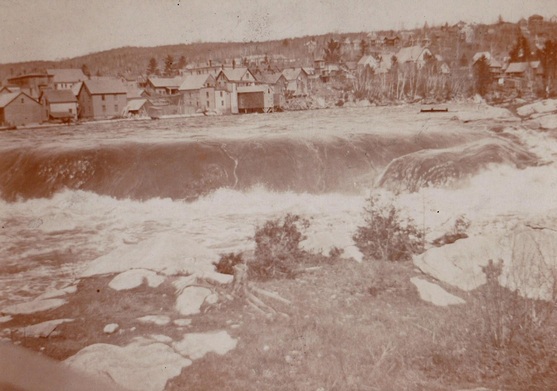 Berlin Falls back in the late 1800's
A group of eight women met on October 1, 1900 in a room in the Clement Block. They wanted to organize a club for women called the “Women’s Club.” Mary Wardwell took the job of choosing officers and club rules.  One week later, 23 ladies gathered at the home of Mrs. Chamberlin and the following officers were elected by secret ballots. They were: Miss Mary E. Wardwell; president, Mrs. Lucy W. Fowler; vice president, Mrs. Emma G. Steinfield; secretary, Mrs. Maria Chamberlin; treasurer, Mrs. Geordie C. Causier and Mrs. Ruby Paine; auditors, while Miss Kate R. Richardson, Miss Alice G. Mason and Miss Isabella S. McDuff became the first directors.
The object of this club was to promote acquaintance and kindly fellowship among Berlin women, and to help them out by teaching them basic skills. By Nov. 5, 1900, the Women’s Club of Berlin was ready to open. Meetings were held at the home of Maria Chamberlin and the dues were $2.00 per year. The Berlin Women’s Club worked to create a village improvement plan. They also worked to improve the local child labor laws and promoted its members for the school board. In 1905, this club decided to create a scholarship fund for students who graduated from Berlin High School and needed help for higher education.
The original women in charge of this fund and the money were Mrs. Lewis Hutchinson and Mrs. Walter Churchill. The money for this fund was raised by sales, tea parties, plays and concerts. Up until 1960, 42 students had used money from this account to continue their education. The club quickly grew and went to the Gerrish Block, to Maynesboro Hall, to the Odd Fellows Hall, the YMCA and by 1914, the City Hall. This club met for almost 50 years in the City Hall.
In 1905, Mrs. Elizabeth (Wadsworth) Burgess was a member of this distinctive club and the fountain in front of the Northway Bank (Berlin City), designed by Philip Wadsworth, was presented to this city by the Wadsworth family in the memory of George E. Burgess. Also, it was through Mrs. Burgess and this club that the first night school was made possible. A music department, with Mrs. Elizabeth Goss James as choir director, was formed out of this club in 1908 and held in Fannie Bell Libby’s studio. It consisted of the study of famous composers and selections of their music, played by some of the talented members of this association.
By 1926, this music group of the Berlin Women’s Club became a chorus with Miss Virginia Bliss as director, and in 1930, they joined a state chorus, with several hundred members performing. On May 25, 1913, the YMCA (Community Club) was dedicated and it was the Women’s Club members who helped raise some of the funds to construct this building. One of their members, Mrs. A.E. Bean was also asked to give one of the opening speeches at the dedication. During World War I, members of this club joined the Red Cross and urged citizens to buy Liberty Bonds, thrift stamps, make garments for war orphans, knitted sweaters and make surgical dressings and bandages. They also raised $400 for contribution to the Red Cross.
In 1924, the membership of Berlin’s Women’s Club was 404, with Esther Uhlachoeffer as president. During this time, the Coos County’s branch of the Children’s Aid Society and the Infant and Child Hygiene Association were established. Club members were among the first to contribute to these organizations. This club met its end in 1965, for whatever reason. This club played its part in the history of Berlin, but on the bright side of things, Berlin has many organizations that help out the city today. 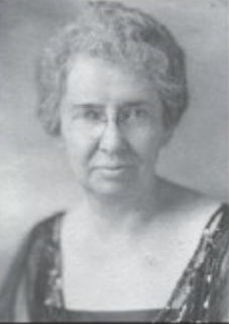 Esther Uhlachoeffer
At a party, which occurred on December 1, 1913, Mrs. Caroline (Gordon) Brown enounced to a group of 95 young girls that she would be starting “The Girls’ Club.” She outlined its program of study; sewing, dressmaking; drawing; and drawing. She let the young women know if they wanted to arrange any other program, to see her and it would be done. Ms. Alice M. Chaffee was elected director of this organization. By 1923, the club grew from a membership of 75 in 1913, to a membership of 300, 100 of which worked for the Brown Company. When a girl reached the age of 14, it was time to join the Girls’ Club.
Although girls get married and sometimes move away, they always kept in touch, and when time came to come back to Berlin for a visit, they would always head over to the club house. By the time World War I came around, classes in first aid, nursing, and cookery were added. Girls came to the club house for many different festivities, birthday parties, engagement parties, bridal showers, going-away parties, and many reunions. Some girls went to the club house once a week for supper and an evening of recreation. Others went once every two weeks.
Of all the organizations Berlin has boasted, none excite higher admiration and more sacred memories than "The Over-Fifty Club.” This club was
organized at a party at the home of Mrs. G. E. Hutchins, July 10, 1899, to celebrate the birthday of her mother, Mrs. S. F. Chamberlin. Its object was
sociability. It was a point of order well taken. When these women were in their late teens, early twenties, the social possibilities for women of those times were few compared with nowadays. They were women of high ideals, homemakers, workers, "Doers of the word and not hearers only." They left "Footprints on the sands of time" that have made life much more pleasant for those who came after. The club was peculiar in that it had no officers, no dues, no stated times of meeting, just a get-together.
It became something of a custom to celebrate birthday anniversaries. Partial records kept by Mrs. Hutchins disclose that such parties were held for Mrs. Fort. Bean, mother of Mrs. Jas. Perkins, and Mrs. John Farrington, and Miss Bridgeman, aunt of Cleve Andrews. Those get-togethers were
unusually pleasant affairs, goes without saying. Those club days were busy days for Ed Hinchey with his horse. He assumed something of a proprietary responsibility for their safe ransportation to and from, and made the ride  jolly with his native witticisms. Banteringly he called them his "Good Old Sports," his "Century Plants," his "Battle-Scarred Veterans." The picture bellow was the first one taken of this club and was taken at the Congregational Rectory during the ministry of Dr. Rufus Flagg. 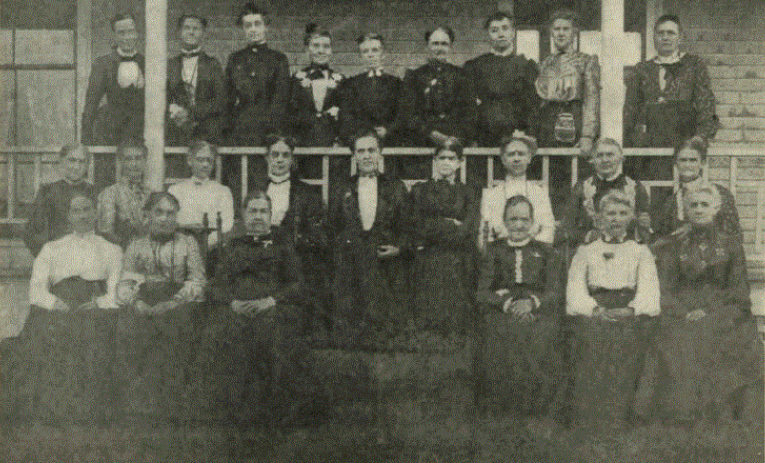 Two very prominent women of Berlin were aunt and niece, Caroline Gordon Brown and Hildreth Burton Smith Brown. Caroline was the daughter of Confederate General John B. Gordon, while Hildreth was his granddaughter. Another interesting fact connects these two women; they both married members of Berlin’s Brown family. Caroline married O. B. Brown, while Hildreth married W. R. Brown, O. B. Brown’s brother and founder of the Maynesboro Stud farm.
Both women became very active in Berlin affairs. Both were in charge of the Brown Company’s Kindergarten at one point in time. Caroline helped
found Berlin’s Girls’ Club and also was active in Berlin’s Women’s Club. Hildreth organized Berlin’s first Girl Scout troop and the PTA, which she  chaired. She organized a child hygiene association in Berlin also. Both women helped organize and ran the Junior Red Cross. These two women’s kindness can only be described as “southern charm.”
Back to the top of this page