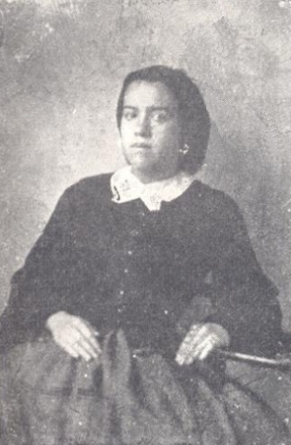 Elmire Jolicoeur at the age of 21
According to the 2010 census, 5,792 out of Berlin’s 10,126 residents are of some sort of French ancestry. This is 57% of Berlin’s population. A question arises, if more than half of the population of Berlin is French, then when, how, and why did all these French people come here? Well I’ll answer these questions. The 1850 census show that there was 173 people living here, all of which could trace their ancestry back to early American Englishmen. Ten years later there was 433 people living here, many of these people where born in places such as Norway, Ireland, Scotland, and Canada.
The French who lived here at this point in time (1860), where mostly men who worked at the H. Winslow Sawmill, which stood where the Heritage Park is today. Some of these men where Thomas and Joseph Daniels, and John Garnet. One must remember that most of these men only worked here for a short time, and then went elsewhere. The first permanent and most prominent French Canadian in Berlin was Benjamin Jolicoeur. Benjamin came here after the American Civil War (1865) to worked at the sawmill. They worked from 7:00 A.M. till 6:00 P.M. and got paid wages from $1.00 to $1.75.
As there were no houses to rent, Elmire, Ben’s wife, remained on the farm with her year-old baby, and her uncle and aunt. After a year she decided to sell out and come to the United States. Packing what personal belongings she wanted, she boarded the train for Berlin without notifying her husband. As there were no amusements, the men would go to the station after supper to watch the train go by. The train stopped, and out came what looked like a little girl with a little sister. What was the men's surprise when they recognized Mr. Jolicoeur's wife? Mr. Joseph Dupill, who had not heard from his wife for a long time (He could not write and there was no one who could write in French among them) said in French, "Gosh, Ben, I'd give ten dollars to the poor, if my wife would only make up her mind to come, too."
Mr. Dupill took the valise on his shoulder, and Mr. Jolicoeur carried his baby, and they went to their boarding place. After partaking of a lunch, Mrs. Jolicoeur unpacked her valise. To the lookers-on, it was much of a surprise box, for from it emerged 10 Ibs. flour, 5 Ibs. butter, made by Mrs. Jolicoeur, 5 loaves of maple sugar, one dozen of fresh eggs, two Ibs. of tobacco and last but not least, one qt. of good old-fashioned cherry wine. (More info. can be found on the page “Berlin Women”)
The reason why the French came to Berlin was because Québec was mainly farmland. There was simply no more room for any more farms, so they left to come to the United States. The reason why there were so many farms in Québec can be traced back to when the British took power of Canada. The British spoke English, and the French spoke French, and there has always been a grudge held by the two of each other. After the War of 1812, the British and the Americans decided to make peace with one another after all these years of fighting. England decided to build a “buffer zone” and what better place to put it on land where there is a large French community?
Basically this discouraged the Americans, if there was any thought of taking Québec. The French would pack up their horse and buggies and come down here. Later on they would come by train. The Canadian element found in Berlin a safe, reliable place to live; Berlin found in the Canadian a willing, obedient, and conscientious worker. The two combined are what has made Berlin what Berlin is today. (Image from Poof Tardiff) 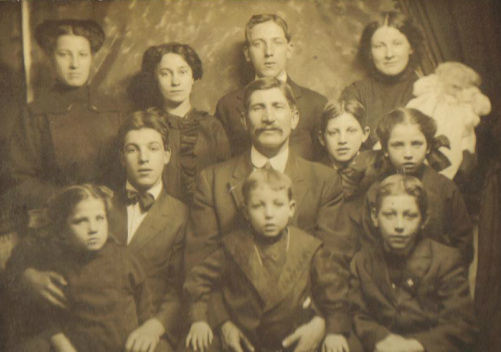 Lazare Croteau and children. Lazare was born in Black Lake, P.Q. in 1875 and came to Berlin in 1893. His wife died giving birth to the baby shown of the right, which is held by his daughter. 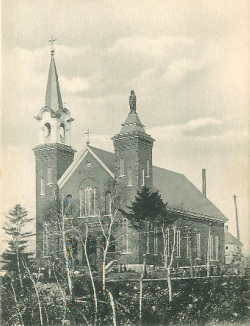 (Image from Poof Tardiff)
In 1860, The St. Anne parish was organized but did not have a full time church. In 1881, Reverend Father Gorman built a small wooden church that was named St. Anne’s. The first Franco-American pastor of St. Anne’s was the Reverend N. Cournoyer who arrived in 1885 and remained 14 years. During his administration he did the finishing touches of the church, built a sacristy and a presbytery, opened classes in the basement of the church and a little later he built a convent and a school. He then invited the Sisters of the Presentation of Mary, St. Hyacinthe, Quebec, to take the direction of the school. At the death of Reverend Father Cournoyer in 1899, the Reverend Louis M. Laplante was named pastor. In April, the old church was moved to school Street and transformed into a school for the lower grades. On July 1, 1899, the contractor, M. H. Roy of Lewiston, began the work for the new, bigger church. The ceremony of blessing the corner stone of the new edifice took place on August 19, 1900. The Right Reverend G. A. Guertin, D. D., bishop of the diocese, officiated. On May 6, 1901, the first Mass was celebrated in the new brick church. The Church still stands today and is on the list of National Register of Historic Places. 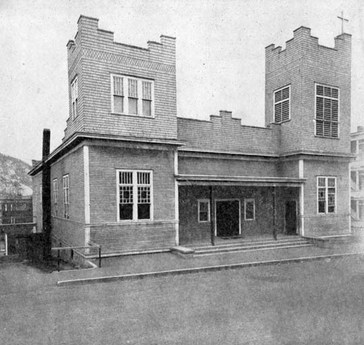 (Image from Poof Tardiff)
The Guardian Angel Church was formed by a division of St. Anne’s parish on Aug. 15, 1917, when the Reverend G. A. Guertin assigned Reverend Father Leclerc to this pastorate. From Sept., 1917, to June, 1918, weekday services were held in a small building at the corner of Grafton and Champlain Streets. The Sunday services were conducted in City Hall. During this period, the present church building and the rectory were under construction. The bishop of the diocese dedicated the church in June, 1918. The people of the parish worked untiringly to make this program of construction possible. Mrs. Francis Seguin proved an exceptionally capable leader in this undertaking. The Reverend Father Leclerc was succeeded in December of 1921, by Father Omer F. Bousquet, who was very popular here in Berlin for opening the Guardian Angel school, bank, and the Notre Dame arena. The Guardian Angel Church is no longer used for Catholic Church services, but instead for Baptist services. 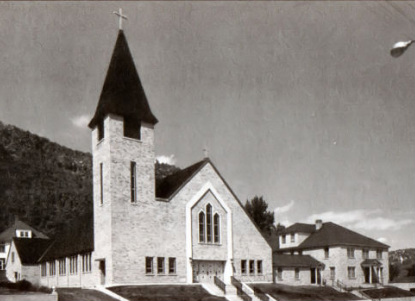 (Image from www.berlinnh.home.comcast.net)
The nuns used the chapel in the basement of St. Joseph’s Catholic School until the Church was complete. St. Joseph’s Church was constructed in 1958 and was the last Catholic Church built in Berlin. It closed in 2000, when all the Catholic churches in berlin were united in to a single "Good Shepherd parish" and currently use St. Anne’s Church as their only church in Berlin.