Other Ethnic Groups and their Churches

There were many other immigrants that came from other countries that need mentioning. In 1898, the Bethel News said that there were fifteen different ethnic groups that were living in Berlin at that time. Here are some of those different groups. 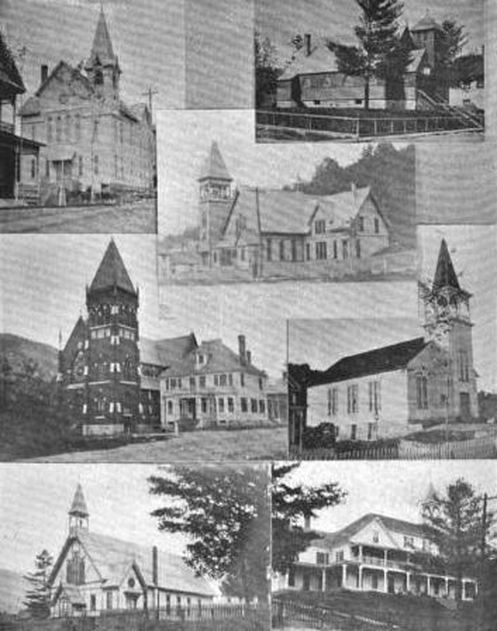 The Germans settled in a part of town called “German Town”. German Town was around Goebel Street (Originally called German Street). Goebel Street gets its name from John Goebel (January 8, 1844- April 30, 1916), a German immigrant that owned a local business on Mechanic Street,  called "John Goebel and Sons" selling hay, grain, flour, feed, grass seed, salt, etc. Mr. Goebel knew his business well because his father, also named John, owned and worked at a bakery in Germany. Not a lot of Germans settled in Berlin, but the ones that did helped out a lot. The Germans were known to be good at working with iron and machinery. Many Germans worked in the mill, as so many other people did with different nationalities. They did what they were good at working on and with the machinery in the mills. Very few German families remain in Berlin today. 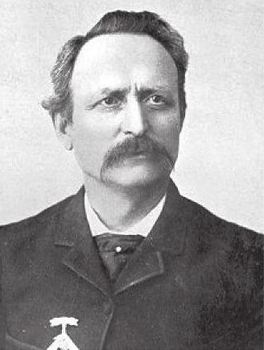 Nehm Stahl, the son of Moses Salomon Stahl and Breine Kaiser, was born July 16, 1804 in Gilserberg, Germany. On October 24, 1827, Nehm bought the estate one Joseph Wagner and ran a small farm at that place. On August 12, 1828, Mr. Stahl married the 19 year old daughter of Jacob Metzger and Nennel Moses, Sara Metzger, from Betziesdorf at Marburg. The two had eleven children, of whom a nameless son died just two days after birth. Nehm died on March 27, 1892 in Gilserberg, and Sara on November 12, 1877. Records show that the two were buried in the Jewish cemetery in Hatzbach, but their graves are unmarked.
Heinemann Hyman Stahl, the sixth child of Nehm and Sara, was born on April 10, 1850. He planned to immigrated to the U.S. with his brother Abraham in 1866, and didn’t come here until 1871. They first worked selling clothing to loggers in the camps here in New Hampshire. Heinemann soon settled in Gorham, in order to sell goods in his store. Heinemann married, on October 24, 1883, Helena Guttmann (born in 1861 the daughter of Julius and Mina Guttmann) the couple had three sons, Jerome G., Norman A., and Everett H. Heinemann  repeatedly visited relatives back in German, most recently in 1897. Helena died in 1904, and Heineman died in 1911 in Berlin, New Hampshire.

Population of Berlin from the United States census

The Italians came to Berlin settled near the Cascade mill in Gorham and on the lower part of east-side. The Italians were great were great masons and they helped build both the mill in Berlin and Cascade mill. Many of them were used of doing that type of work because that is what they did back in Italy. Berlin never had a “Mafia” so to say but they had little gangs or groups, not all of them were Italian. Most of the Italians in Berlin were not criminals, but very hard workers. Once they had finished their work for the Brown Company many would get assigned to another job. Some people didn’t go back to work for the Brown Company, instead they started their own little business building houses or owning a restaurant. Berlin has large numbers of Italian families still living here and still making their delicious home recipes. 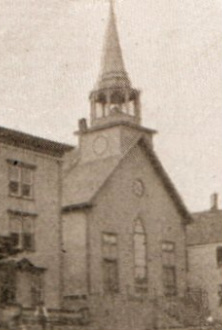 (Image from Poof Tardiff)
The Universalist organized a society in 1886 and built their church in that year. The building is 38x60 feet. The land was donated by Daniel Green on November 18th of 1886. This building was rented by many other societies and latter bought by the Jewish and made in to a Synagogue. 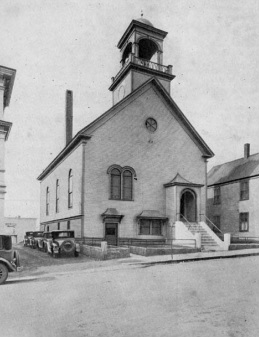 (Image from www.berlinnh.home.comcast.net)
The Jewish were from both Russia and Germany and they settled near the avenues. In 1890, the first official Jewish service was held in the Hodgdon Block. Later the services were held at the home of Hyman Lewis, people also worshiped in Buckley and Pickford Halls on Mechanic Street as well. Moses Brown, R. B. Lewis, Charles Brody, Nathan Abramson and others, on Nov. 4, 1915, a charter was secured from the state of New Hampshire to form the Beth Israel. On Oct. 18, 1918, the Universalist Church was purchased for a synagogue 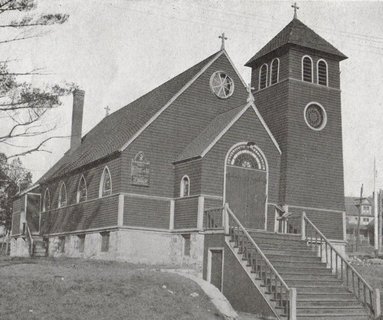 The original St. Barnabas Church (Image from Poof Tardiff)
St. Barnabas Mission of the Protestant Episcopal Church was organized by the labors of the Reverend William Lloyd Himes of Concord, with the help of Henry H.
Furbish. This church had the first pipe organ in Berlin. It was a big wooden
building that stood on the corner of Main and High Streets. The church began to
get too small, and on September 29, 1929, a new stone church replaced the older
one.
This new church not only came in the year of the 100th anniversary of the incorporation of Berlin but had special interest because it coincided with the 40th year from the building of the original church in Berlin. The old church eventually was moved and either was torn down or burnt down. 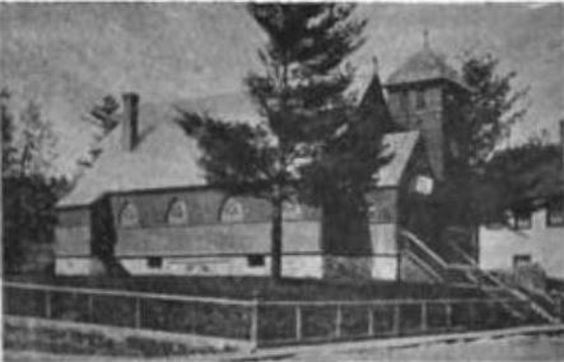 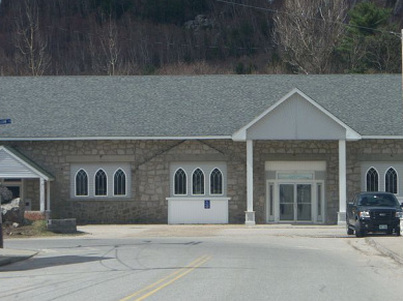 The Harvest Church building was built in 1942 by the National Youth Administration. The NYA got its start here in Berlin, during the year 1936. It was founded as a part of Franklin D. Roosevelt’s “New Deal”. It began as a part of the Works Progress Administration and then it became a component of the Federal Security Agency. The Church was originally a machine shop where young boys and girls learned how to weld excreta but eventually it took on many different operations. Today it is a place for Christian worship and has been for many years. This Church was not built by any one ethnic group but by many, being the first to do so.
- Also see The NYA Machine Shop on our Other Buildings and Landmarks page 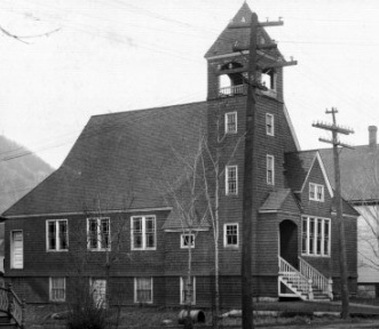 (Image from www.berlinnh.home.comcast.net)
The first Baptists lived around the Androscoggin River near the "Fiberville" company sawmill. When Berlin was young, most of it's Residents were Baptist that is why the church is called the “First” Baptist Church because it is considered to be the first religion in Berlin. As the different churches were built here, many of the followers left this religion because there was no place of worship. The first Services were held in the old Salvation Army building. The first service in a real place built for the propose of worship was in the Universalist Church on Exchange Street in the year 1895. The Reverends A.S. Stowell, O.C. Sargent, and O.R. Hunt were appointed the committee. The first meeting in the new church was on April 15, 1900. 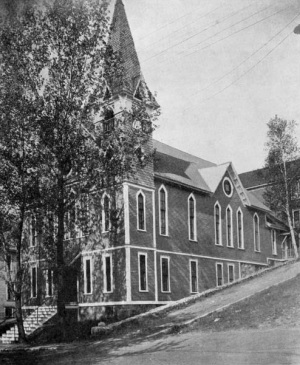 (Image from www.berlinnh.home.comcast.net)
The exact date when Methodism was brought to Berlin is not known, because some of the earliest settlers were of that faith. In 1888, Reverend Nixon of the Maine Conference held meetings in various homes. Later, as the attendance at the meetings increased, they moved to Music Hall, then to a ball in the Day Block on Main Street. As the Berlin and Gorham churches were united, Reverend Merrill came to Berlin regularly and held services on Sunday afternoons. When Berlin separated from Gorham in 1893, Reverend Greenhalgh conducted services in the Universalist Church, and later in the Whitney Opera House, which was often called "Epworth Hall." In 1894, it was felt that the society could afford a building of its own. On October 2, 1895, the present church was dedicated. After this an Epworth League was started. Since 1894, there have been a number of modern improvements. A pipe organ has been installed, a parsonage purchased, and the choir loft enlarged.
Back to the top of this page