The Town of Gorham, New Hampshire

In 1770, it was brought to the attention of Governor John Wentworth by the grantees of Shelburne that the greater portion of that grant was full of mountains and wanted a second grant of “more improvable lands”. The grantees received a new grant to go along with the old one, this new land was called “Shelburne Addition”, and it was known by that name until 1836, when it was incorporated under the present name. The name was suggested by Lot Davis, whose mother’s maiden name was Gorham, the same family in which Gorham, Maine is named after.
The person one could call the “first settler” was a man named Bezaleel Bennett in 1803. He was a wanderer from Pigwacket (Conway) and brought with him his mother and sister. He only stayed a few years before leaving. In 1805, Stephen Messer, a native of Methuen, Mass., came here with his wife, Anna Barker, and built a log home. According to tradition, Mr. Messer was the only “praying man” in town for years. Mrs. Messer was one of the most intelligent women of her day, and possessed a good education. 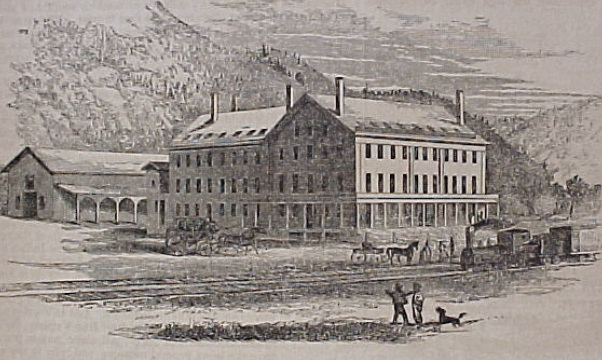 The White Mountain Station House (later called the Alpine House) in 1857
The next families to settle in Gorham were the Jacksons and Goodnos. Henry Goodno came here in 1807, when the small roads were covered in
six feet of snow, and built a rough log-cabin, which was more like a camp than a home. It is he who, in 1812, enlisted in the army and was made a recruiting officer and enlisted about 20 men in Shelburne and vicinity, and, with them, marched across the country and joined an expedition against Canada.
Joseph Jackson came in 1807 and purchased fairly large lot from Benjamin Weld, which  is now the site of Gorham village. He built a log house and became the first settler to settle in this part of Gorham. Now a very interesting fact of Gorham’s past, Mr. Jackson was accused of aiding Henry Tufts, an uncle, in passing counterfeit money, and was sent to state prison. He escaped from prison, and rumor says he left this country on a vessel bound for the West Indies, and settled at Matanzas, Cuba, where he died.
When he lived in Gorham, Mr. Jackson was a very active man. He went to Canterbury, N.H., and obtained a sack full of small apple and pear trees and started a large orchard, the first in the town.  This orchard was where the Congregational Church now stands. At this time in America’s history, counterfeiting was carried on to a great extent in Canada. Men would actually pass through Shelburne Addition (Gorham) to go up to Canada for the purpose of obtaining “easy cash”, so to say.
The first school was taught in 1823 by Ms. Salome Mason, of Gilead, for the sum on $1.00 a week. She boarded with the families of the children she taught. Ms. Mason was a noted teacher in those days, and was known in the entire Androscoggin valley. The first mill in town was built by Jonathan Lary in 1834. This was a gristmill and stood on the Moose River. The first sawmill was built, in 1836, near the site of the gristmill by Jonathan and Andrew Lary.

Population of Shelburne Addition (Gorham) in 1810 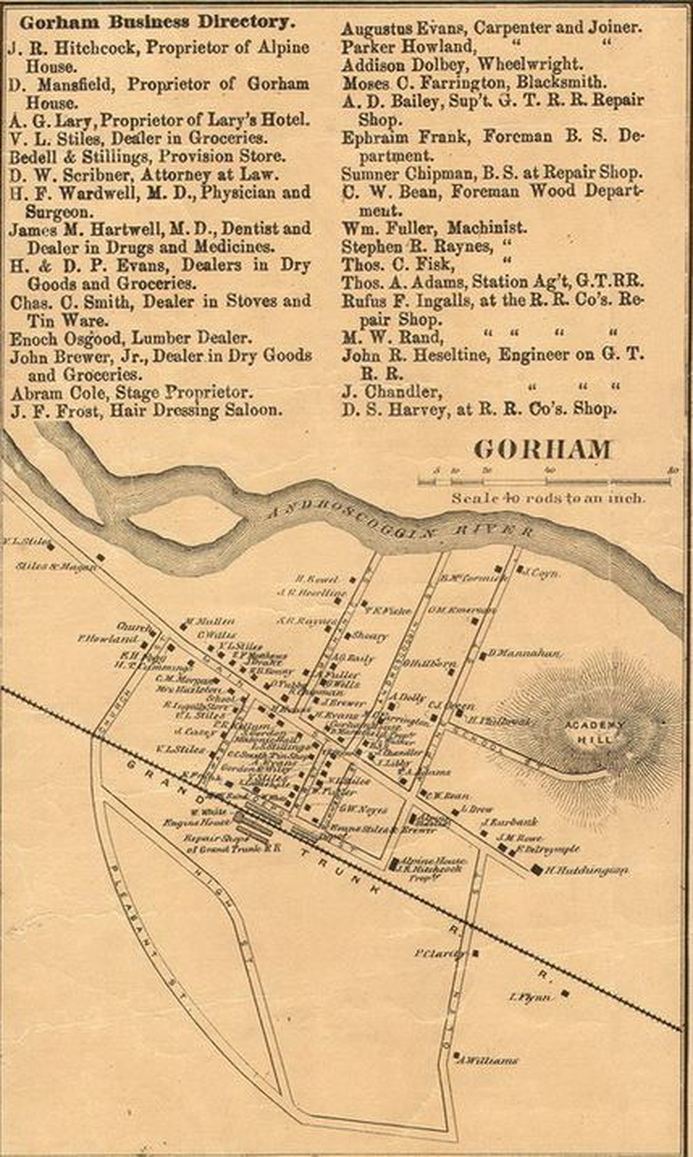