According to the Oxford Dictionary, a “home” is “the place where one lives permanently, especially as a member of a family or household.” When many people today think of a “home” they think of a nice, big house with running water, electric lights, indoor plumbing, and all the other modern day conveniences, but one must remember that this was not always the case. In the summer of 1824 , William Sessions of Gilead, Me., came to Berlin, N.H. (then called Maynesborough) and started to clear five acres of land near where the Berlin and Coos County Historical Society’s barns in the Maynesborough Industrial Park now stand. This was no small task, as described by Bailey K. Davis in his Traditions and Recollections of Berlin, N.H. (1897):
“He [Mr. Sessions] cut trees on about five acres at first near where the buildings now stand, and, when these trees were sufficiently dried with the hot summer sun, the ground was burnt over. This was done by going around on the edge of the “chopping,” as it was called, and setting fire to the dry stuff thereby making the flames draw toward the center thus keeping the fire away from the surrounding woods that the green growth might not be killed.” 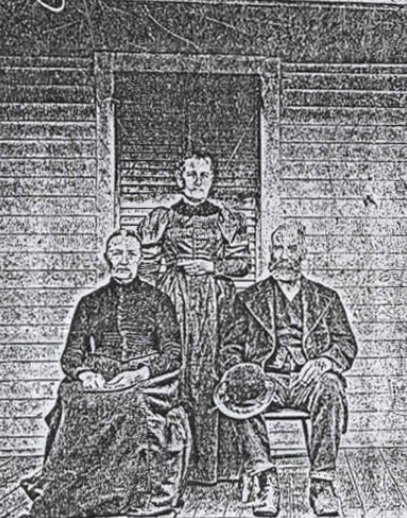 left to right: Zeruah (Blodgett) Wheeler, Marietta (Wheeler) Dyer, and Cyrus Wheeler (Courtesy of Rebecca Manuel, descendent).
Stumps, roots, and rocks were also removed before the actual construction of house could get started. All of this had to be done without the use of modern tools and machinery. But luckily, “Uncle Bill,” as the children of the old settlers use to call him, was the type of man that hardly ever got tired, often doing the work of two ordinary men and hardly taking the time to eat or sleep until the task he was trying to accomplish was completed.  Next up on William Session’s to do list was to construct his home, which occurred in the spring of 1825 with the assistance of Cyrus Wheeler, Sessions’ then 15-year-old nephew.
The log house was supposedly 20’x22’ feet and had three windows that contained six lites of glass of the size of 7”x9” inches, a chimney made of a cobblestone-clay mortar mix, and a pine shingled roof. The inside of the structure had a ground level floor, where the old-fashioned oven, which had a rock floor and brick walls, was and a raised upper chamber that was used for sleeping. With this, Mr. Sessions had his home, and Berlin (then called Maynesborough, as before stated) had its first resident.
The exact spot where the Sessions’ log cabin stood in the Maynesborough Industrial Park is uncertain. The History of Coos County (1888) states that, “it was situated just east of the present farm buildings on a little knoll.” The “present farm buildings” mentioned are the house that use to stand between the Brown Company’s barns and the smaller of the barns, which still stands today. With that being said, it would appear that William Sessions’ log home stood where the road to the state prison is today. Bailey K. Davis was less certain, only stating that it stood, “near where the buildings now stand” as before stated.
Mr. Sessions and his family left Berlin after only a few years of living here, selling out to Benjamin Thompson. He went on to settle no less the thirteen other farms, including another in Berlin during later years. He died in Milton Plantations, Me., on August 4, 1884, he was well over 90 years old.
As for Mr. Wheeler, his father, Thomas, came to Berlin in 1826 and built a log house where the old Twichell farm (now owned by the community college) now stands (2016). Cyrus eventually bought out his father and stayed there until his death on November 20, 1893. After Cyrus died, his second wife stayed in that same house, which was then owned by her son-in-law, J. Howard Dyer, and his wife (Cyrus Wheeler’s daughter), Marietta.
Another little interesting tidbit about Mr. Sessions should be brought to our attention before the close of this article, a quote from Chester L. Bean, writing in the Berlin Reporter of December 27, 1926:
“They [the early settlers] use to tell that he [William Sessions] kept a pig until it weighed 400 pounds. He built a platform outdoors and got the hog up on it, don’t know how. He then took a quilt or something and covered the pig up. He heated water in a tea kettle over an open fire, turned it over, scalding one part of the pig at a time. He would clean and dress that part while heating water for the next part. Then he took three poles and a chain and pulled him up enough so that he worked the platform away then the pig swung clear. Old farmers say that they never saw a nicer dressed off hog. It was done in fine shape. Sessions was one of the first settlers in Berlin, felled first trees on Thompson Farm. He would start a place, sell to someone else and start another place.”

Back to the Top