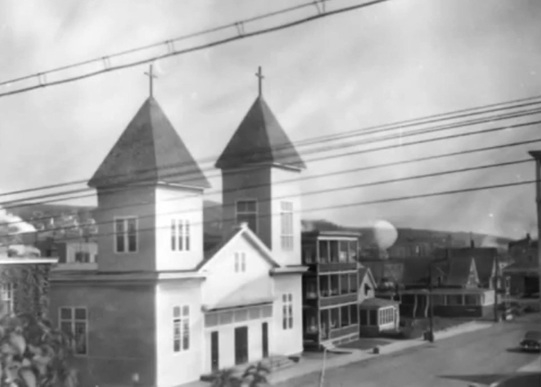 The Guardian Angel Church, more commonly known as “Angel Guardian” Church due to the way the words are structured in the French language, was the only Catholic Church to ever operate on the east side of the Androscoggin River in Berlin.  It was open from the years 1917 to 2000 with its boundaries being to the north, Cambridge, N.H.; to the south, Gorham, N.H.; to the east, the Maine State line; and to the west, the Androscoggin River. At its peak, Guardian Angel served 850 families, in other words some 3,200 souls. Guardian Angel Parish has certainly was a special place to its parishioners. Even today, although the church is closed, it holds a special place in the hearts and minds of its former parishioners. 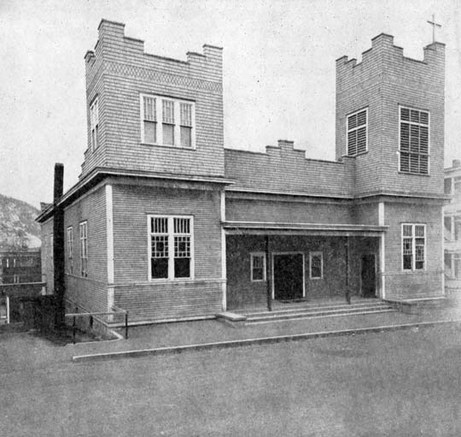 An early view of Guardian Angel Church (Image from www.berlinnh.home.comcast.net)
In the beginning of the 20th century, the increasing numbers of French speaking Roman Catholic immigrants in Berlin caused St. Anne’s Church, the only French speaking church in Berlin at that time, to become overcrowded. The situation was brought to the attention of Most Rev. George Albert Guertin, the third bishop of Manchester, who assigned Rev. Joseph J. Leclerc to the Catholics on the east side of Androscoggin River in Berlin. At first, Fr. Leclerc held Mass in the City Hall on Sundays and Holy Days. Later, Paul King’s plumbing shop, which once stood at 92 Grafton Street before being replaced by an apartment building, was converted into a temporary chapel until a suitable location for the construction of a permanent church edifice could be found.

A location on Sullivan Street was purchased and the land was cleared. Construction of the church, rectory, and school started in 1917. The church was intended to be only a temporary chapel until funds were available to erect a much larger church, but this never happened for whatever reason. A year after construction started, Guardian Angel Church was dedicated by the bishop in June of 1918.

When Fr. Leclerc was transferred on December 1, 1921 to St. John the Baptist Church in Manchester, all the parish buildings were occupied, but there still remained  much work that need to be done inside these buildings and on the grounds surrounding them. It was the Rev. Msgr. O. F. Bousquet, his successor, who supervised the completion of the work, and with the help of his parishioners, paid off the large debt. Fr. Omer Francois Bousquet was born in St. Pie de Bagot, Que., Canada on August 17, 1881, the son of Francois and Elodie (Auger) Bousquet. He studied theology at the Grand Seminary of Montreal and was ordained to the priesthood on December 23, 1905 for the diocese of Manchester.

In those days, industry was flourishing in northern New England, and French Canadians were coming to this country by the thousands each year to search for greater job opportunities and new homes for their families. Because of this, the bishops of New England and northern New York State, not having the necessary number of French speaking priests to serve the needs of these immigrants, sent a request to their fellow bishops across the border for help. This is how Fr. Bousquet and many like him came to this country.

Hard times hit shortly after Fr. Bousquet came here. The Great Depression caused many of his flock, most with large families, to lose their jobs. This did not discourage the rugged middle-aged priest. He persuaded the Brown Company to allow him to use a large section of field at the Brown Farm in order to create a garden to feed his parishioners and other Berlin families who were in dire need of food for their survival. He also built a large potato vault at the rear of the parish school and filled it every year for the use of his people.

The invention of the electric refrigerators put an end to the usage of ice boxes for the preservation of food, although only the wealthier parishioners could afford buying one. Soon the door to door ice sellers discontinued their operation, so the monsignor rented some old ice barns located near the cemeteries, and with the help of volunteers, filled these barns with ice taken from the river during winter for the use of his poorest parishioners during summertime. He also built a chicken, turkey, and duck farm at the end of Forbush Avenue in order to provide eggs and poultry for the poorest. Every Monday morning, Fr. Bousquet would gather a group of the parish youth, whom he would let drive his car, and go and buy groceries for needy prisoners and to pay for bills of certain families. 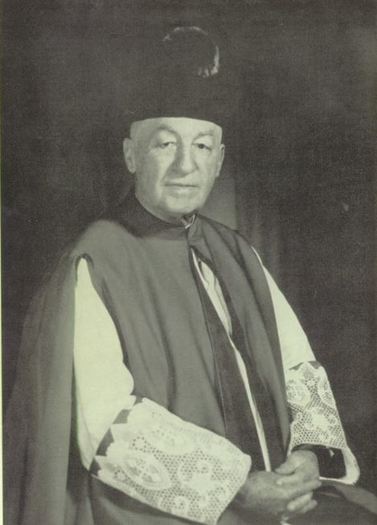 Rev. Msgr. Omer F. Bousquet (Image from the 1957 Notre Dame High School yearbook)
Fr. Bousquet was not a politician by profession, but had the know-how and skill of a good politician. Most of the local and out of town men of politics came to him to seek advice. To many in Berlin he was known as “The Mayor of Ward 4” due to his influence in public affairs. To brother-priests in the diocese, he was known as “The Bishop of the North” and to many more as “The Great Oak of the North.”

At the request of the late Bishop Matthew F. Brady, Fr. Bousquet was decorated by Pope Pius XII with the title “Monsignor” and was made a domestic prelate of the Pope December 12, 1955. He died November 1, 1958, at the age of 77. L'abbé O. F. Bousquet was buried with his parents in the St. Anne’s cemetery here in Berlin.

Fr. Bousquet’s immediate successor was the Rev. Rodolophe Heon, who had been pastor of St. Francis Xavier parish in Groveton for about 13 years prior to coming here. When Fr. Heon came here, he was a sick man, and no one knew about it, not even the bishop. On April 16, 1959, after four short months here, Fr. Heon passed away. He was 61 years old.

The book, Upon This Granite: Catholicism in New Hampshire, 1647-1997 by Wilfrid H. Paradis, contains a somewhat humorous event. While at Rev. Rodolophe Heon’s funeral in Berlin, Fr. Heon’s relatives emptied the pockets of Bishop Brady’s suitcoat, thinking that his belongings belonged to their deceased relative. While on the ride back home to Manchester, Bishop Brady realized he was missing the items in his pocket and had his chancellor-chauffeur turn around to reclaim his lost property, which he did successfully.

Shortly after the death of Fr. Heon, Bishop Brady assigned Rev. Henri Brodeau. Fr. Brodeau had spent some 12 years as pastor of the Catholic Church in Sanbornville. It was during his tenure that the parish conference room and garages were added to the rectory. On April 8, 1965, with much regret of his people, Bishop Ernest J. Primeau sent Fr. Brodeau to St. Francis Xavier in Nashua.

On this same date, Bishop Primeau sent Rev. Maruice A. Leclerc to Guardian Angel. Fr. Leclerc was no new face to the parishioners, since he was an assistant priest in the parish from the years 1946 to 1954. He was a veteran of World War II, serving four and a half years in the United States military. On leaving the parish in 1954, Fr. Leclerc went to North Stratford as pastor of the Sacred Heart parish, and it was there he stayed until returning in 1965. 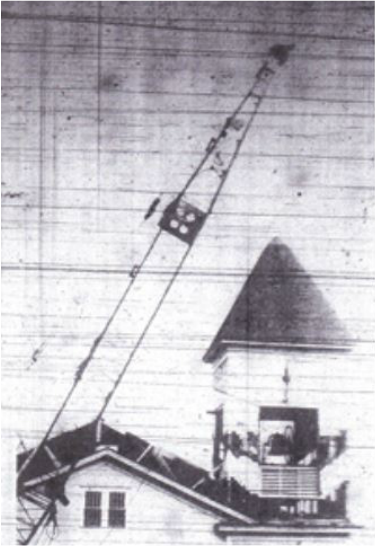 Removal of the bell, 1974 (Courtesy of Paul "Poof" Tardiff)
Under his leadership, the parish school received a facelift, both materially and educationally. New windows were installed in the school in 1965; the schoolyard received an overall repair; the interior of the school was repaired and redecorated; the teaching of the French language at the school was reduced to only an hour a day. The parishioners also built a parking lot for the parish in 1966 to accommodate for some 80 cars. On January 22, 1967, the parishioners elected a parish council or advisory board, thus becoming the first parish in the diocese to do so.

At this time, the parish had 3,200 souls, representing some 850 families. Six Masses were held on Sundays and Holy Days; five in French and one in English. In September of 1971, Rev. Robert Simard succeeded Leclerc. Extensive renovations of the interior and exterior of the church began during this time. The renovations included the removal of the church’s bell and steeples, which took place on Saturday, July 20, 1974, as many of the parishioners watched.

The bell was purchased by the church in its early days from the old Universalist Church (now the Heritage Baptist Church) on Exchange Street. It was casted in Baltimore, Maryland and bore the inscription, “Berlin Falls N.H. 1887.” The bell was replaced with electronic chimes. A new pitched roof was also added.

The sanctuary and nave were remodeled and furnished with pews from St. Martin’s Church in Somersworth. Rev. Charles Desruisseaux became pastor in 1975. He served only a few months and was succeeded by Rev. Donald Martineau. It was during his stay at Guardian Angel that the parish school, then known as “Catholic East” closed and its students were sent to Berlin Regional Catholic School. Rev. Eddy Bisson became the 9th pastor in 1981. He founded the St. Vincent de Paul Society in the parish and provided classrooms in the former school for a thrift shop. He also began the Memorial Mass Education Fund, which memorialized the deceased and at the same time helped in catechesis for the parish youth.

Big thanks go out to Marielle Fillion Houle, Janice Webster Brown (visit her blog here), and others who provided information to make this history possible. 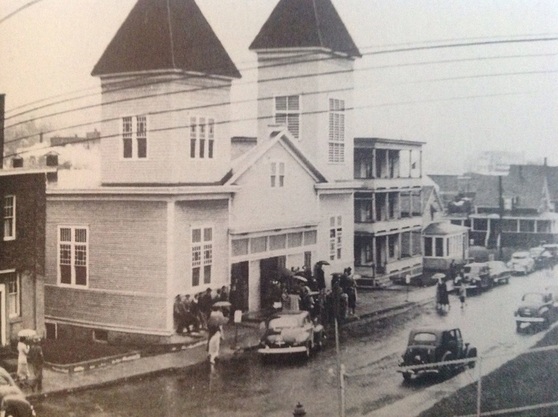 Guardian Angel Church, 1930s (Image from Images of America: Berlin by Renney E. Morneau)
1930, March 17. To Visit Holy Land. Rev. O.F. Bousquet of the Angel Guardian Church of Berlin (were among the members of the NH clergy to sail for four months pilgrimate through Europe and the Holy Land).

1934, Feb 3. Assistant Priests, Rev. Leo Poulin is transferred from the parish of the Angel Guardian in Berlin to St. Paul's Parish in Fraklin. For the present no assistant will be sent to take Father Poulin's place in Berlin.

1955, June 2. New priests and where they will sing their their first solemn masses...Robert S. Simard, Berlin, Angel Guardian church.

1955, Dec 22. The Rev. Omar F. Bousquet, pastor of Angel Guardian Catholic Church here since 1921, will observe his golden anniversary in the priesthood tomorrow. Ordained in Montreal in 1905, Father Bousquet was assigned as curate the following year to Sacred Heart Parish in Lebanon. He also served parishes in Franklin, Manchester, Laconia and Troy. In 1941 he founded Notre Dame High School here and under his leadership Notre Dame Arena was built six years later.

1960, Nov 12, Rev. Henri A. Brodeur, pastor of the Guardian Angel parish in Berlin was named to the post of pro-synodal judge of the marriage court.

1964, Jan 7, Presiding at the office of the dead will be . Rev. Henri Brodeur of Guardian Angel Church of Berlin.

1967, Oct 10, The Rev. Gerard Vachon of St. Louis de Gonzague church in Nashua will serve at Guardian Angel Parish in Berlin after being with the Nashua church for a year and a half.

1972, July 8, Nashua Telegraph
Rev. Robert Simard, a former chaplain at Bishop Guertin High School and who is now pastor of the Guardian Angel Church and chaplain of the Berlin fire dept. came to Nashua to pick up the items donated [by Marguritte Aubin..who directed a drive for the relief of Berlin residents left homeless by fire...]