The Town of Milan, New Hampshire

Milan, Coos County, New Hampshire was first granted to Sir William Mayne, Paul Wentworth, and others on December 31, 1771 (same day as Maynesboro or Berlin) under the title of Paulsburg; it retained this name until December 16, 1824, when the modern name was chosen. The name of Milan was chosen by Governor Levi Woodbury, who named it after a friend of his called Milan Harris. In 1810, the population was about 14. Among the first permanent settlers was  John Ellingwood. Mr. Ellingwood settled on Barrows Mountain, named after his wife, Rachel Barrows, and is now called Milan Hill. Ellingwood was a farmer, a  good Christian, and a deacon of the Methodist church. He died about 1830. His son Isaac was the first white child born on Milan Hill.
Daniel G. Ellingwood was probably the first settler on the Androscoggin in Milan. Thomas Lake lived below D.G. Ellingwood. He made only a small clearing and remained only for a few years. Benjamin Hibbard from Newry, Maine came a little later than 1822 and located and lived for some time on the  east side of the river. He died in Milan. Reuben Sargent lived here only a few years then moved away.
Early in the 19th century, probably before the War of 1812, a man named Eames erected a mill near what was then called Paulsburg Water Station (Copperville). It consisted of a primitive saw-mill with an “up-and-down”saw with a wooden crank, and a grist-mill with stones about as large as grindstones. Much of the way to the mill had no road, and the boards were carried on the roadless portion up the hill on the backs of men, who received a glass of rum for each board brought up. On July 1, 1830, a corporation by the name of Milan and Success Lumbering Company was founded by Barker Burbank, Cyrus Twitchell, Ransom Twitchell, Daniel G. Ellingwood, and John Ellingwood. They purchased land around
the Chickwalnippe and what was then called the Narmarcungawack (Sterns) brooks.
The first mill on the Ammonoosuc was built as early as 1835 by a company consisting of Henry Snow of Effingham, Dr. Loren Hildreth, and one
Roberts of Parsonsfield, Maine. In 1838 or ’39, the property was sold to Amos Green of Berlin. Mr. Green carried out operations until an outbreak of
California fever and left it to his son George, who made more money off of this mill than his father did.
In 1868, Alfred N. Twitchell with others built and ran in Milan the first steam starch-mill in the state. They continued this until 1875. In August of 1877, Nathan Fogg, while haying, went to William Fogg brook to get a drink and saw something glittering on the bottom. He soon blasted the rock and sent spectmens to Professor Huntington at Hanover and had him come to examine the place.

The Home of Daniel G. Ellingwood once stood around the site where the house in the photo now stands. In the late 1880’s this property was owned by Adams Twitchel.
Professor Huntington found gold, silver, copper, and a trace of lead in the rock. The land was bonded to Zalmon Taylor, who sunk a shaft twenty
feet, but did not develop further. Charles H. Souther and D.F. Leavitt then leased the land but did not do much work. In 1881, Mr. Fogg sold the mine to
Hanson Gregory Jr. for $7,500; he operated it for sometime but then sold it to Boston and Portland parties, who erected buildings, employed from 65 to 70 men during 1884 and ’85, and accomplished much work.
The vein was followed about 825 feet and a depth of 200 feet. The richer metals diminished in quantity as the shaft left the surface. Copper
became the chief metal, hence the name “Copperville”, exhibited chiefly as a sulphuret. The sulphur formed an important element of the profit in working the mine, and, on account of its low value, the work ceased in the fall of 1886.
At some point in time, the work at Copperville started back up, although I’m not exactly sure on the exact date, nor am I sure of the date when
it ended. On September 4, 1908, Martin Kane was working in the copper mines at Copperville, and with others, he decided to visit West Milan for a drink and became somewhat intoxicated.
On returning to Copperville, Mr. Kane was left behind and later, after starting to return to Copperville alone, laid down upon the railroad track. He was not seen by anyone of the different engine crews that passed over the line during the night. The next morning, Mr. Kane was surprisingly found alive beside the track at the east end of the West Milan yard with one leg and one arm torn off and his right foot badly crushed. He was taken to the St. Louis Hospital in Berlin where he died on September 6th. 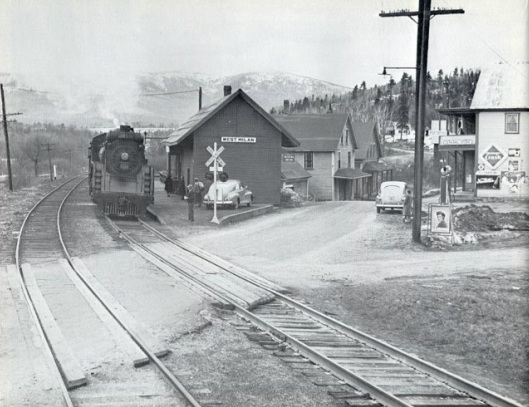 GT 5304 at West Milan station, 1952 (Dr. Philip R. Hastings photo)
The first regular store was opened at West Milan by Ezra Horn around 1850, when the Grand Trunk railway was being built. In 1857, Simon Cole built a store opposite the railway station and continued trade there until 1860, when he sold out to his son, Lewis H. Cole, who built a store in another part of town. By 1865, the store was in the hands of Edwin W. Wilkinson, who closed out in 1869 and moved to Groveton.
When Lincoln’s call for 300,000 men to go off to war was made in the fall of 1863, the quota for Milan was ten. On a Saturday evening, ten young
men, or rather boys, got together and met at the blacksmith’s shop and, with closed doors and extinguished lights, all agreed to volunteer. These young men were Sylvester Newell, Samuel Ordway, Nathaniel P. Ordway, John L. Ordway, Walter H. Evans, James Pettengill, George L. Vincent, Charles H. Hamlin, Charles Ellingwood, and Henry F. Paine. All the boys were schoolmates.
All the boys except Henry F. Paine, who was too ill, set out for Lebanon the next morning. They were examined and enlisted, given a nine days’ furlough, and went home to prepare for war. The boys chose to join the Ninth New Hampshire regiment and headed off to Kentucky. James Pettengill was to die at a hospital of an illness; the second to die was Charles Ellingwood, who was also ill. Only seven of these Milanites returned home. 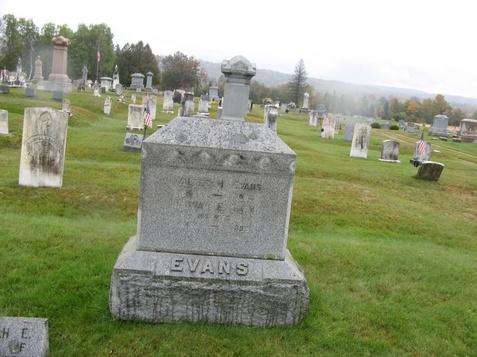 Tombstone of Walter H. Evans 1846-1907 and his wife, Anna E. Lary, Hillcrest Cemetery, Milan NH
Adams Twitchel was born in Bethel, Maine on January 27, 1812. He lived in Milan with his parents as a boy but soon left to work in the lumbering business in the Upper Penobscot valley. He eventually returned to Milan and purchased the piece of land where the church now stands but soon sold and purchased the former property of Daniel G. Ellingwood. On this small clearing was a primitive log-house.
This place was developed until about 300 fertile acres in a fine state of cultivation, and a very beautiful home was built. He married Lusylvia Bartlett on October 31, 1843. She was a lady of refinement and ability, who “looketh well to the ways of her household”. After his marriage, Mr. Twitchel carried on  lumbering in connection with farming, and became a large operator, also conducted merchandising for some years. He gradually came to have extensive  dealings in buying and selling timber-lands.
In 1867, Twitchel bought the “Colebrook Academy grant” of 10,000 acres, soon sold it, then bought with George R. Eaton 18,000 acres in Clarksville, and other large tracts in Upper Coos and in Canada. He was chosen captain of the first militia company formed in Milan in 1835. When the Atlantic & St. Lawrence railroad was “dumping” about 14 feet of dirt into one of the public highways of the town, thus blockading it, Mr. Twitchel was elected
selectman to fight for the rights of the town.

Paulsburg on the U.S. Census of 1810
Mr. Twitchel was elected was elected railroad commissioner, but declined to serve as his private affairs demanded his time. Although he was not a member of any religious denomination, he gave generally to the churches, he was a good man, and practiced more than he preached. A clergyman was once asked about Twitchel and he replied,
“Mr. Twitchel swears sometimes, and that is wrong; he gets in hay on Sunday sometimes, and that is very bad; but I would gladly exchange half-a-dozen of my church members for one or two men just like him.”
Mr. Twitchel is entitled to the credit for the energy he displayed and the obstacles he overcame. The story of his business has been briefly told, but he is not all about business matters. When he was a boy, he studied at night and during leisure moments, and acquired a fair education ; when a young man he was advised by his father to read American history, in the hopes that he would become an intelligent voter, and from that time he became a great reader of historical works and other solid literature.

Adams Twitchel (1812-1897) from the history of Coos County, New Hampshire
The first religious work done in Milan was on Milan Hill by the Methodists and later (1848) was under the supervision of Jesse Spencer. A church was erected in 1856 at the cost of 2,200 and by 1888, it had been repaired several times and still to this day (2012) has had ongoing renovations. The first pastor of this church was Reverend Daniel Barber.
In 1864, services took place on the other side of the river on Sunday afternoons at what was called the Willis School, which, according to old maps, stood at the north side of the bottom of Chickwolnepy Road. Under the care of A.W. Frye, in 1901, a cellar was dug, a chimney built, and a modern furnace installed. The inside was also modernized at that time.
In the early 1900’s, the steeple that now stands was built after dismantling the old one, fearing it would be hit by lighting because it was the
highest point in the village. It is said that one could hear the bell all around town. Miss Grace Enman, one of Milan’s oldest citizens, recalled hearing the
bell ringing in 1918 and noted that it wasn’t a Sunday. She could hear the faint sounds of the mill whistles in Berlin. All this activity had signaled the end of World War I on November 11. 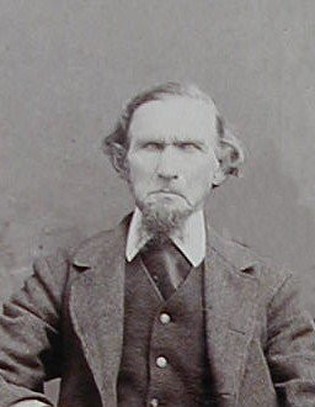 John Wesley Ellingwood Jr. was born in Milan on May 15, 1824. He owned and operated a sawmill in Milan and it is said that he got drunk one day and stole the poster belt from his own sawmill and hide it from his workmen. They pleaded with him to get the belt back but all he did was sit down and smoked a tobacco pipe. He soon after moved to California, where he died on Sep. 26, 1902. (Image from “Find a Grave” uploaded by Bonnie.)
Back to the top of this page